Nudity and the law in Spain 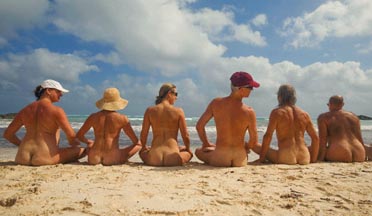 In Spain being naked is one of your Rights.

Since 1978 with the coming into force of the current Constitutional Charter it could be assumed that nudism became another of our rights. But we continued to drag along legislation contrary to nudity in public, inherited from the pro-Franco period.

In this way, the offence of public scandal still existed, in the Penal Code, which penalized nudism. This situation led to authorized areas being established, where nudism could be practiced freely without fear of being sanctioned. This offence was modified in 1989 suppressing the moral nature considerations, to adjust it to the Constitution.

Like this, all the authorizations of beaches or Naturist areas, are based on legislation contrary to the Constitution which was corrected in 1989 and which later disappeared in 1995 with the repeal of the previous penal Code, and the

approval of the current one, in which this offence is no longer contemplated. In this way, all authorizations and prohibitions are contrary to the Constitution and they constitute a discrimination.

It is surprising that the authorizations which allowed the first nudists to enjoy areas where they did not take the risk of colliding with justice, are later the main argument which is used against nudism, since it is professed that as authorized areas or beaches exist, on the rest of the beaches it is not authorized, so it is forbidden. Which is false.

Article 9.2 in the Carta Magna places public authorities under the obligation to remove any hindrance in the way of individuals and groups to which they belong so that their freedom and equality may be effective.

It is important for us to understand that according to the current legislation, nudism cannot be limited, nor sanctioned and, even less so, forbidden.

Of course this can change, since it would be sufficient for a law to be passed so that these measures could be applied, although this would be contrary to the fundamental rights set out in the Carta Magna and would also go against those recognized in the Universal Declaration of Human Rights.

Until today nobody has given even one valid argument against nudism. They have appealed to aesthetics, to elegance... which are arguments that are annulled “per se” . And fundamentally moral reasons are argued, morality being set out in the Constitution, and protected... ... Specifically, the equality of moralities is set out and that none should prevail over another except, of course, that one of them contravenes the law, and nudism does not.

If at any time you have any problems from practicing nudism in Spain do not hesitate to contact us at.

If the police appear and infringe on your rights, this is what you should do:

This approach is very hard because you need to be prepared to go through the situation in the same way as women’s libbers had to, to achieve their rights

Refusing to get dressed is not punishable as a disobedience misdemeanor.

They can also indicate that there is some type of legislation which, if it is true that it exists, will likely be some type of municipal legislation. In this case they have the obligation to proceed, but that legislation is irregular and the sanction, in the case of there being one, or anything else which they do can be appealed against under national Spanish law.

Legal empowerment of the municipalities to establish sanctions is necessary. To establish a sanction there must be a law which indicates this, and the Town Hall is never the body to establish a fine in the absence of an empowering law. In the case of nudism that law does not exist.

They can also threaten to report you for public scandal. That statute no longer exists.

Ask them to indicate in which article of the penal code it is established. Indicate to them that such a misdemeanor does not exist and that you do not have to take notice of them.

They may threaten with an offence which does exists, which is that of “Exhibitionism and Sexual Provocation” (Art. 185 of the Penal Code) arguing that there are minors present. For that to be applicable several things would need to occur:-

In the event of a fine, get in contact with FEDERACIÓN ESPAÑOLA DE NATURISMO or with the nearest naturist association.